DJ Razor (real name: Peter Osback) tells Billboard, “While my heart will forever grieve, I find solace in knowing that the world, and more importantly, myself, was blessed in knowing and sharing so much with this kind, generous and wonderfully brilliant human being. I will miss and love him always.”

Gone But Not Forgotten: Music Stars In Memoriam 2016

Razor N’ Guido are well-known for their innovative, progressive, hard house style, having entertained clubgoers and dance radio listeners alike for the last two decades. The pair created remixes of songs by a multitude of artists since the late ’90s, including reworkings of tracks by Madonna, Rihanna, Shakira, The Notorious B.I.G., Gloria Estefan, George Michael and Kim English.

How Many Of ‘The 20 Catchiest Songs Of All Time’ Have Been Stuck In Your Head? Have you ever wondered which hit songs have the most unforgettable hooks? Yeah, me either, but researchers have answered the question we didn’t ask. Researchers at The Museum of Science and Industry (Manchester, England) and The University of Amsterdam have enlisted 12,000 people to listen to the hook of 280 chart-topping songs (the 40 best-sellers from each decade from the 1940s onward) and name the song as quickly as they could.

Here’s the list of damnable earworms the researchers came up with, ranked by how quickly the 12,000 respondents could recognize each chart-topping song when played from the hook (the timestamp in parenthesis): END_OF_DOCUMENT_TOKEN_TO_BE_REPLACED The producer is one of the most crucial yet anonymous figures in all of music. Every now and again we aim to illuminate these under-heralded artists with Beat Construction. This week, we spoke to Matt Martians, the Odd Future producer/keyboardist who co-founded The Internet, helmed Kilo Kish‘s debut, and inspired Kendrick Lamar with his free-form production experiment The Jet Age of Tomorrow. We talk about ’08 Myspace, ’14 Atlanta, and the perfect powder keg balance of sound and image he’s striving to reach. END_OF_DOCUMENT_TOKEN_TO_BE_REPLACED

Getting The Most From Amp Tone Controls 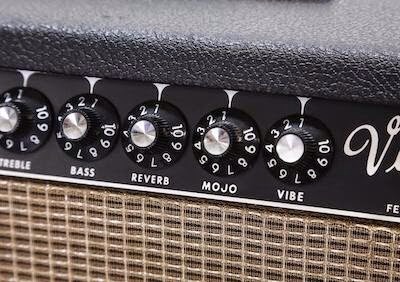 I’m always kind of baffled when I hear a band live and there’s no separation between instruments, especially between guitar players. Then I think back to when I was a young player and remember, “They just don’t know how to set their tone controls yet.”

For too many players, setting those amp tone controls is such a random act with little thought behind it. Here’s an excerpt from my Ultimate Guitar Tone Handbook (written with the excellent guitar player, composer and author Rich Tozzoli) that gives some context as to how to get those most out of these controls.

“So often players are confused by the tone controls on their amps. What’s the best way to set them? Is there a method for doing so? In order to get the most out of them, it’s best to understand the reasons why they’re there in the first place.

The biggest reason for having tone controls is so that all the frequencies of your instrument speak evenly so no particular range is louder or softer than any other. Shortly after the first amps were developed with only a single “Tone” control, manufacturer’s noticed that players might be using guitars with different types of pickups with their amps, so more sophisticated tonal adjustments were really necessary. A guitar with a humbucking pickup might sound too boomy through an amp, but if you roll off the low-end with the bass control, the frequencies even out. Likewise, a Strat might be too light on the low-end or have too much top-end, but a simple adjustment would make all frequencies come out at roughly the same level.

Another place where tone controls come in handy is if you have a frequency that really jumps out, as compared to all the rest, either because of the way the amp is overdriven or because of a pedal. Often a slight adjustment of the Treble, Middle or Presence control can alleviate the problem, although these controls will also adjust all the frequencies around the offending one as well.

Where tone controls are especially effective is how the guitar fits within the context of the mix of the song. You want to be sure that every instrument is distinctly heard and the only way to do that is to be sure that each one sits in it’s own particular frequency range, and the tone controls will help shape this. It’s especially important with two guitar parts that use similar instruments and amps (like two Strats through two Fender Super Reverbs). If this occurs, it’s important to be able to shape your sound so that each guitar occupies a different part of the frequency spectrum. To make our example work in the mix, one guitar would occupy more of a higher frequency register while the other would be in a lower register, which would mean that one guitar has more high end while the second guitar is fatter sounding, or both guitars might have different mid-range peaks.

Not only do guitars have to sonically stay out of the way of each other, but they have to sit in a different frequency space than the bass and drums (and vocals, keys, percussion, and horns if you have them) too. As a result, you either adjust the tone controls on your amp or try another guitar so it fits better in the sonic space with everything else. While the engineer can do this with equalization either during recording or mixing, it’s always better if you get as close to the sound as possible out in the studio first because it will save time and sound better too.

The best way to get an ear for how guitars are sonically layered is to listen carefully to a number of hit songs in almost any genre and really dissect how everything fits together. Of course, the producer, engineer or artist (if you’re playing on someone else’s recording) will also have specific ideas as to the sound they’re looking for in the track, and will guide you in that direction.”